After a period of very unsettled, windy and wet weather, a nice autumnal sunrise. This turned out to be the best part of the day. Shortly after sunrise clouds quickly gathered, the wind picked up and apart from a brief few minutes around sunset, the sky was mainly overcast with showers throughout the afternoon. This time of year dramatic lighting effects, often very short-lived can occur at any time of the day and whether one is in the right place at the right time is usually a matter of luck. 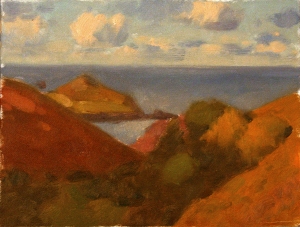 While painting the afternoon sketch in the rain, a tiny parasitic wasp only a few millimeters long became partially mired in a thick puddle of white oil paint in my pochade box. When small insects get stuck in paint either in the paint box or on the painting itself it’s usually impossible to remove them without making a bad situation worse and unintentionally killing them. Watching this tiny insect, stuck by its two rear legs, struggling to extract itself from the mire, it was difficult to resist the almost overwhelming temptation to try and help it, and knowing what the result would most likely be from past experience, I decided to leave it.  I continued to paint, carefully avoiding the insect while a light but persistent rain fell, and watched to see what would happen. To my amazement, after nearly 45 minutes, it managed to eventually free itself. Picking a small leaf off a blackberry bush I was able to lift it off the paint onto the leaf, where, with legs covered in white paint, it made its way under the leaf away from the rain. Gently placing the leaf back down on the bush I wondered what would become of it. In any event I was powerfully reminded of the universal impulse to self-preservation, the mainspring driving the strength of will to survive against all odds, to never give up in the face of adversity.

An afternoon of high winds, broken cloud and sunny spells following heavy rainfall overnight and this morning. The ocean is becoming more interesting to paint again as some decent waves come into shore, an indication of incoming rough weather as a cycle of slow moving depressions sets up to pass over the country during the next three or four days. Quite a few trees have already lost most of their leaves. It’s not uncommon here for the first gales of autumn to strip the rest bare before the warm yellows and golds of the season have had a real chance to appear.

After a relatively cloudy start the skies cleared and the coast enjoyed a warm and sunny early autumn day.  By the afternoon the strong, blustery wind presented quite an obstacle when executing this sketch.  The Sun’s glitter path on the ocean is much more apparent than during the summer months when the Sun is higher in the sky, as, now tracking southwards along the horizon, it decreases in elevation with each passing day.  As autumn gives way to winter the glitter path will become ever more narrow until the winter solstice, after which the process will play in reverse heralding the return of spring and summer.

A morning of rapidly shifting light and shade crawling across the landscape amid blustery high winds. Quite a difference from the past few days of drizzle and fog.

Sketch of sky colours and reflections in the pond at Nine Maidens common. I tried to get as much information down as quickly as possible in this abbreviated sketch before the light went. I may return again when the conditions are right to try and address some aspects of the scene that I didn’t understand this time around.